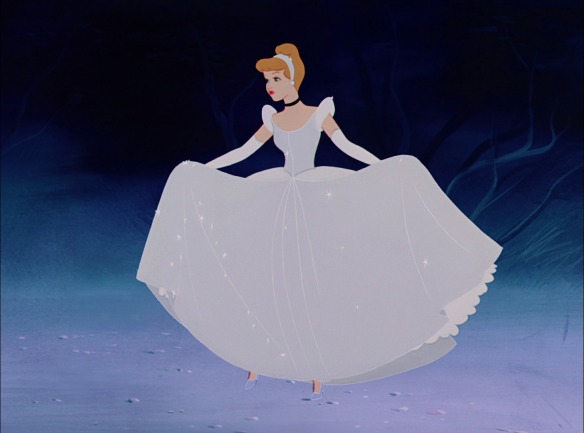 Lorelai is referring to the 1950 animated Disney film Cinderella, based on the French fairy tale by Charles Perrault. Cinderella was a massive critical and commercial success for Walt Disney, and was the #3 film of 1950. It is considered one of the greatest animated films of all time.

In the film, Cinderella wears a silver-white ballgown which is made blue in promotional materials; reproductions of the dress made for children and teens tend to be made from tulle.

Neither Lorelai nor Rory ends up wearing a tulle dress to Rory’s first birthday party, so I’m not sure what happened to the dresses Emily bought them. As Lorelai tells Emily they wore them to the party, maybe she tore all the tulle off and they wore the slip dresses that were underneath? Or perhaps Lorelai is simply lying.

At the very least, the lacy green cardigan that Rory wears wasn’t made by her mother – Lorelai wore it to Friday Night Dinner in Kill Me Now, and Rory must have borrowed it.