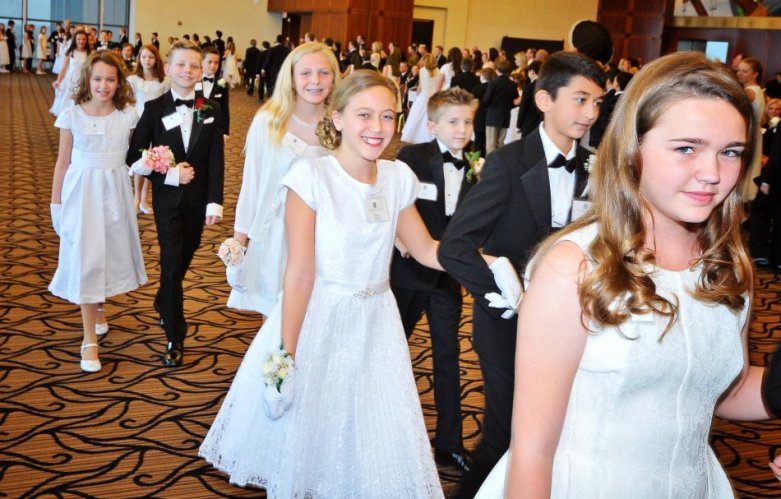 RORY: Why don’t you go to a wedding dress place and try a real veil on?
LORELAI: No way.
RORY: Why?
LORELAI: Too much taffeta, it gives me cotillion flashbacks.

Taffeta is a smooth plain-woven fabric made from silk. It is considered a luxurious fabric suitable for ball gowns and wedding dresses.

In American usage, a cotillion is a formal ball, often for presenting debutantes to society. However, Lorelai is most likely talking about cotillions as a class for younger girls, perhaps aged 10 to 13, to prepare them for their future debut in society. Such classes teach social etiquette, followed by a formal party where they put what they’ve learned into practice. We later learn that Emily teaches these classes, and probably taught Lorelai when she was younger. 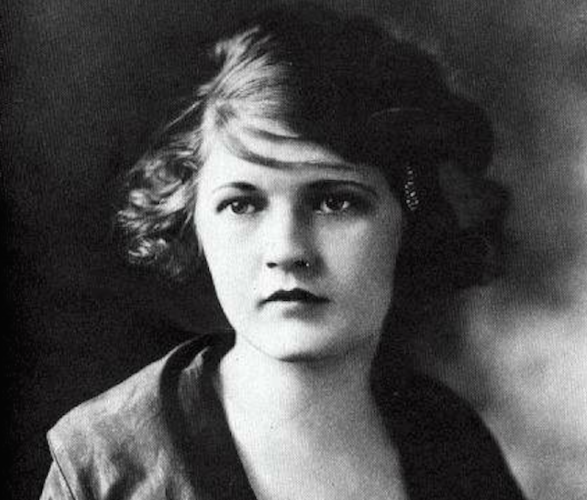 RORY: Did you pick out your ring?
LORELAI: Yup, he’s gonna surprise me with it tomorrow.
RORY: Twenties Deco?
LORELAI: Supposedly ripped right off of Zelda Fitzgerald’s cold dead hand.

Zelda Fitzgerald, born Zelda Sayre (1900-1948) was an American socialite, writer, artist, and the wife of author F. Scott Fitzgerald. The couple became icons of the Jazz Age, and her husband dubbed Zelda “the first American flapper”.

The Fitzgeralds’ marriage deteriorated, and Zelda was admitted to psychiatric care, diagnosed as schizophrenic. She spent the rest of her life in and out of sanatoriums. Like Amy Sherman-Palladino, Zelda studied ballet as a child, and as an adult, became obsessed with it again to the detriment of her health.

LORELAI: Okay, well, did you date like casual nothing type dating, or did you date like get down, Soul Train kind of a dating?
MAX: Well, I wouldn’t have phrased it that way, but to be honest, it was the latter.

Soul Train is an American dance-music television program which aired from 1971 to 2006. The show mainly featured performances by R&B, soul, dance-pop, and hip-hop artists, but with some funk, jazz, disco, and gospel music as well. The long-running show was extremely influential on the development of African-American musical culture. 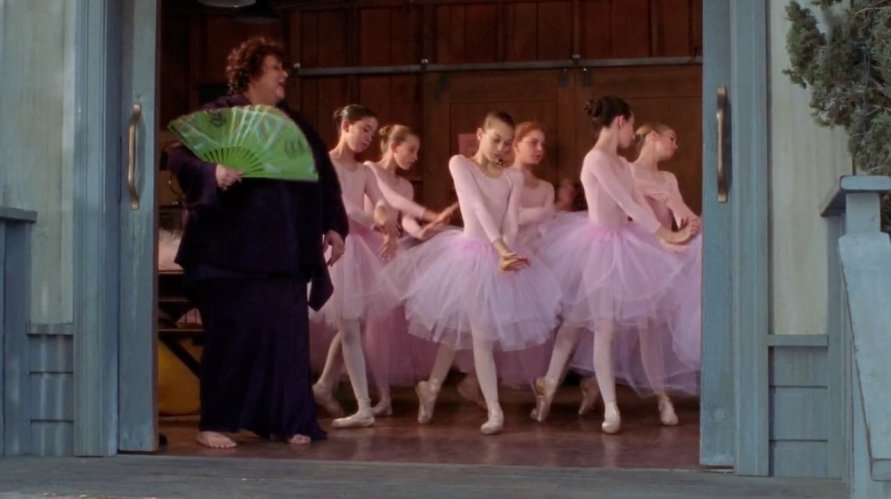 Miss Patty’s class is doing Swan Lake, a ballet composed by Pyotr Tchaikovsky, and premiered by the Bolshoi Ballet in 1877. The story, based on Russian and/or German folk tales, is about Odette, a princess turned into a swan by an evil sorcerer’s curse. A handsome prince named Siegfried falls in love with her, but the sorcerer tricks him into agreeing to marry the sorcerer’s daughter, Odile.

Miss Patty seems to describe the ending of the ballet, where Odette is heartbroken over Siegfried’s betrayal, even as she forgives him for it. In most productions, both lovers die in order to break the curse, although by drowning, not getting hit by an arrow – it is early in the ballet where Siegfried nearly shoots Odette, thinking she is a swan.

Miss Patty may have created her own unique ending for her production (a rather grim one to teach children – children’s productions often substitute a “Disney style” happy ending). Then again, the music used in this scene is Lake in the Moonlight, which plays during the first scene of the ballet. She could be telescoping the ballet into a single scene for her class.

The use of Swan Lake expresses Rachel’s fear that Luke has feelings for Lorelai, demonstrating that she feels betrayed and heartbroken over it. In this episode, both Rory and Paris also fear that the boy they like has found a new girlfriend, only in those cases, the fear is unfounded. Swan Lake is yet another work referenced in which doomed love leads to suicide.

LORELAI: She [Rory] was happy.
EMILY: Happy?
LORELAI: Yeah – she screamed, she did that air-lasso thing over her head.

Lorelai is referring to when people twirl an imaginary lasso over their head in celebration, like a cowboy saying, “Yee-ha!”. Sometimes incorporated into dance moves. 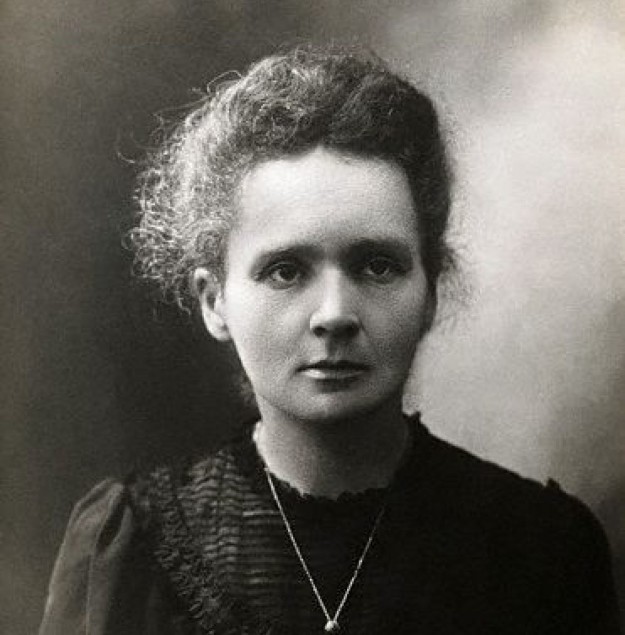 PARIS: Yeah well, I doubt highly that Madam Curie was voted most likely to dress like Jennifer Lopez.

Marie Curie, born Maria Skłodowska (1867-1934) [pictured] was a Polish-born French physicist and chemist who conducted pioneering research on radioactivity. She was the first woman to win a Nobel prize, the first person and only woman to win it twice, and the only person to win it in two different sciences. The Curie family, including Marie, her husband Pierre, daughter Irène Joliot-Curie, son-in-law Frédéric Joliot-Curie, and son-in-law Henri Labouisse, has won more Nobel Prizes than any other family. She was the first woman to become a Professor at the University of Paris, and the first woman to be entombed at The Panthéon in Paris on her own merits.

Jennifer Lopez (born 1969) is an American actress, singer, dancer, and fashion designer. She began her career in 1991 as a dancer on television before branching into acting in 1993 (although she’d made her film debut as a teenager in a low-budget film). Her first starring role was in Selena (1997); she went on to star in other films in the 1990s, becoming the highest-paid Latina actress in Hollywood. She ventured into the music industry in 1999, with her debut album On the 6, which had two Top Ten singles. In January 2001, a few weeks before the events of this episode, she brought out her second album, J.Lo, around the same time as the release of her romantic comedy, The Wedding Planner, becoming the first woman to have a #1 album and #1 film in the same week.

We learn here that Paris’ ambition is to work in medical research toward the better understanding and treatment of cancer. It apparently doesn’t work out that way. Oddly enough, Liza Weil, who plays Paris, would later play a character who dies from cancer on medical drama Grey’s Anatomy. 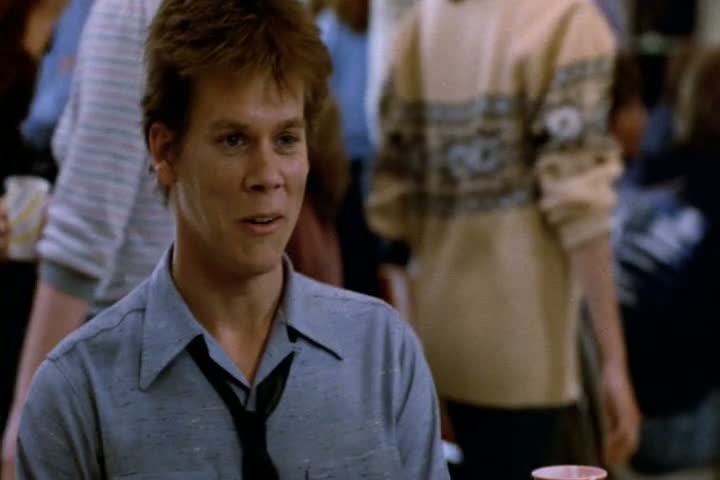 RORY: Some people like getting up early.
LORELAI: You lie.
RORY: No, they do it voluntarily …
LORELAI: Ha! Jump back!
RORY: Excuse me?
LORELAI: Kevin Bacon, Footloose, reaction to the no dancing in town rule is revealed to him by Chris Penn, brother to Sean, sage to all.

Footloose is a 1984 musical film directed by Herbert Ross, and starring Kevin Bacon as a Chicago teenager who moves to a small town and discovers it has banned dancing and rock music. In the film, his character says, “Jump back!” when his new friend in town, played by Chris Penn, explains to him about the no dancing rule. (Chris Penn, who died in 2006, was a brother of actor Sean Penn, but I don’t know how he was a “sage to all”).

Footloose was the #7 film of 1984. Despite mixed reviews, it is generally held to be cheesy good fun, and has been turned into a stage musical, and had a remake in 2011.

Lorelai jokingly compares her shock at learning that some people get up early, even on Saturday mornings, to the shock Kevin Bacon’s character feels at discovering that an entire town has banned dancing.

Cabbage patching means to do the cabbage patch dance, a hip-hop dance where you put your hands together as fists and move them in horizontal circles. The dance features in the 1988 song The Cabbage Patch by Miami bass group Gucci Crew II, which became popular in dance clubs. The dance seems to have been inspired by Cabbage Patch Kids, the doll fad of the 1980s, combined with “cabbage” as slang for paper money. It’s a celebratory dance, often associated with sporting victories. 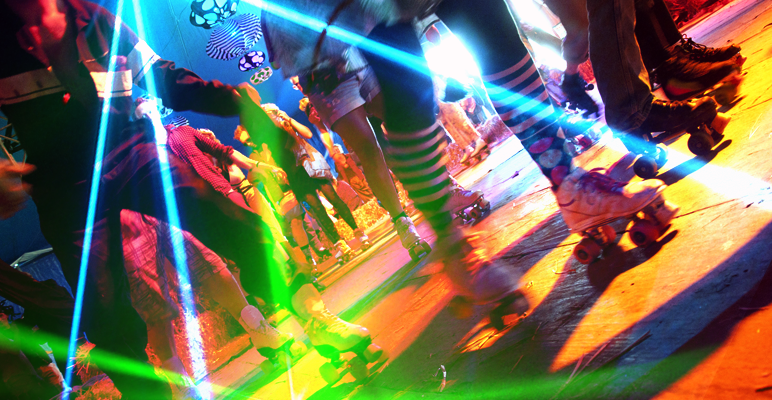 LANE: I’m gonna get a soda, anybody want anything?
LORELAI: Yes, the night of my 14th birthday back so I can right the green-hot-pant-roller-disco outfit wrong.

A roller disco is a skating rink where the dancers wear roller skates to move to disco music (or any modern dance music). The concept originated in the 1970s and peaked around 1980, although they are still held now as retro entertainment.

Lorelai’s 14th birthday was in 1982, so she was already slightly behind the trends when she chose her roller disco outfit (it actually fits better with Amy Sherman-Palladino’s 14th birthday in 1980). It’s not clear whether her birthday was celebrated at a roller disco, or she just thought it would be a good outfit to wear to her party. Let’s hope the first one.

PARIS: I do like Mr. Medina.
RORY: Well I’d take some dance lessons ’cause the way you express yourself needs a little work.

Rory is referring to interpretive dance – a modern dance style which seeks to express human emotions through the medium of dance. The style was pioneered by Isadora Duncan around 1900.