LANE: It’s so amazing to be back. When I got off the plane, I kissed the tarmac.
LORELAI: Just like the Pope.
LANE: It was hot and I burned my lips.
RORY: Maybe that’s why the Pope always looks so grumpy.

Pope John Paul II, previously discussed, made a point of always kissing the ground when he arrived in a country as a sign of love and respect for the nation and its people.

LORELAI: What is that?
LUKE: Oh, it’s a chuppah.
LORELAI: A what?
LUKE: A chuppah. You stand under it, you and Max. It’s for your wedding.

A chuppah is a canopy which a Jewish couple stand under when they are married. It’s usually a cloth or sheet (sometimes a prayer cloth) held up by four wooden poles. In Orthodox Judaism, there is meant to be open sky above the chuppah, just as is planned for Max and Lorelai’s garden wedding. The chuppah represents the home the couple are making together, which will always be open to guests.

Lorelai wonders whether it would be inappropriate for she and Max to have a chuppah, and gains reassurance from Luke on that point. Luke is actually correct: there is nothing specifically Jewish about getting married under a canopy (other religions do it too), and it doesn’t necessarily have to be religious in nature. These days there’s a bit of a trend for non-Jewish canopy weddings, and as long as it isn’t actually called a chuppah it doesn’t usually cause offence.

The chuppah is a gift from Luke to apologise for his behaviour towards Max. He knows he has been bit of a jerk about Lorelai’s wedding, and wants her to know he is still there for her as a friend. At the end of the scene, Luke and Lorelai are shown standing together under the chuppah as a sign that they will be married one day (when it happens in A Year in the Life, it will take place under a “canopy” beneath the sky, but not the chuppah).

It isn’t all that believable that the Luke we have got to know so far would actually make a chuppah for a non-Jewish wedding after getting the idea from a book (how did he know how to pronounce the word from reading it in a book?), and it seems awfully contrived.

This 1983 pop song by British new wave band Culture Club plays at the drag club after True finishes. It is the song that Michel dances to, after saying that he had to “shake his thing”.

Church of the Poison Mind was the lead single from Culture Club’s most successful album, Colour by Numbers. It was a hit around the world, and went to #10 in the US, and #2 in the UK and Ireland.

The lead singer of Culture Club, Boy George, is gay, and cross-dressed as part of his 1980s stage persona, and Church of the Poison Mind is about Christianity’s attitude to homosexuality.

RORY: I’m like ten years behind on my extracurriculars.
DEAN: What are you talking about?
RORY: Paris has been accumulating these things since she could walk. I mean, she has a list of good deeds that could bump Mother Teresa off the Harvard list.

Mother Teresa, born Anjezë Bojaxhiu (1910-1997) was an Albanian-born Roman Catholic nun and missionary who lived most of her life in India, caring for the poor. In 1950 she founded the Missionaries of Charity, which cares for the sick, and manages soup kitchens, orphanages, and schools.

Mother Teresa won numerous awards during her life, including the Nobel Peace Prize in 1979. Sh was canonised as a saint in 2016, and in 2017 named one of the patrons of the Roman Catholic Diocese of Calcutta. 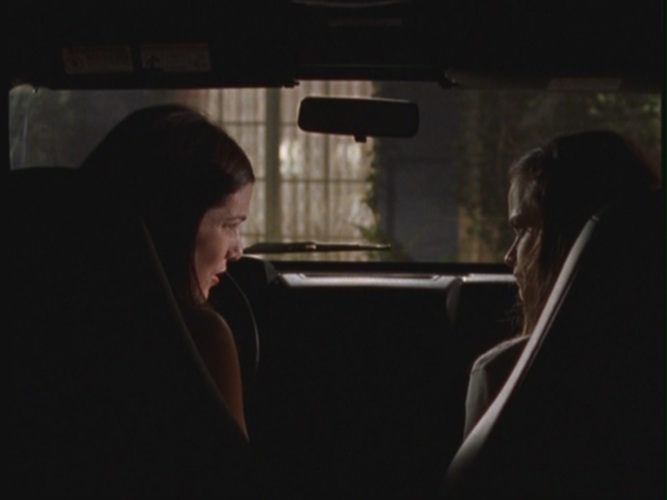 RORY: I will be assisting, I will be helping out those less fortunate than myself, I will be getting college credit and this is the end of this particular conversation.
LORELAI: You’re right. It’s a good thing. Nice, keeps your halo shiny.

As becomes increasingly clear during this episode, Rory is volunteering purely for college credit, and doesn’t really care about the less fortunate. She’s not quite as angelic as Lorelai thinks.

JACKSON: Uh, hey, do you wanna look at the Brussels sprouts?
SOOKIE: Yes, I do. [giggles] No. Ooh, what about some nice Brussels sprouts with like a garlic olive oil for the wedding? That sounds like a “‘Til death do us part” kind of side dish, doesn’t it?

Sookie is just teasing Jackson, but later they will be married for real.

Ivana Trump (born Ivana Zelníčková in 1949) is a Czech-born American businesswoman and former model who was the first wife of Donald Trump, now the US president. They were married in 1977 and divorced in 1992, and he was her second husband. She has married twice more.

After her divorce from Trump, Ivana began selling her own line of clothing, jewellery, and beauty products through home shopping channels, wrote several novels and a self-help book on surviving divorce, had her own advice column, and bought up interests in Croatian media.

The story about pig’s gland being injected into her butt every two weeks seems to be fictional, but in line with the ideas of what silly, vain, and very wealthy socialites might get up to. Ivana Trump is not Jewish, and therefore not kosher.

The reference to the much-married Ivana may be a hint to Lorelai that marriage does not always last.

This is our introduction to a new character, the news vendor Bootsy (Brian Tarantina). We never learn Bootsy’s real name, or why he was given the nickname Bootsy. The name might remind you of singer William “Bootsy” Collins from Bootsy’s Rubber Band; in his case, his mother nicknamed him Bootsy because “he looked like a Bootsy”. 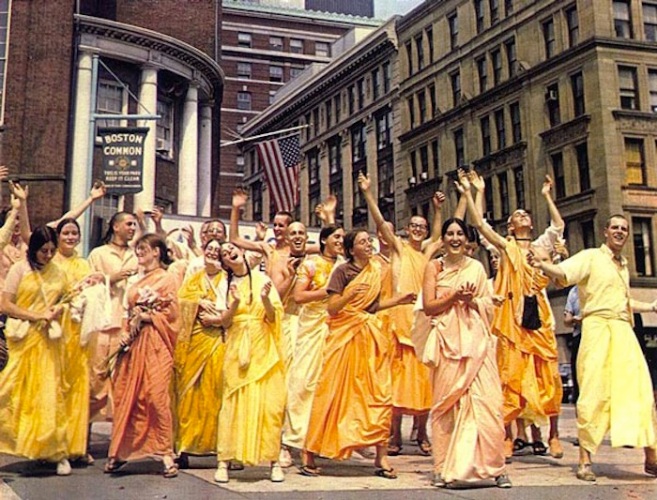 CLARA: Where’s your [Girl Scout] uniform?
RORY: Oh, we’re not doing uniforms anymore. You know, we’re trying to blend in, relate better to the average person. It was a very successful strategy for the Hare Krishnas, so …

The International Society for Krishna Consciousness is a Hindu religious organisation, often called “Hare Krishnas”. It was founded in New York City in 1966 by A. C. Bhaktivedanta Swami Prabhupada, who is worshipped by his followers as a guru and spiritual master. They worship Krishna as the highest expression of godhead, and promote yoga and a vegetarian diet.

Members of the organisation traditionally dressed in saffron robes, so that they were sometimes called “Orange People”. These days, they have integrated into the community, and often dress in normal clothes, just as many of their beliefs have become mainstream.

Girl Scout uniforms have changed throughout the years, and Rory’s statement has almost come true, as these days Girl Scouts wear casual pants and polo shirts, with a waistcoat or over-shirt to display badges on.

The episode begins with Lorelai asleep in bed, only to be suddenly awoken by a loud banging noise. She cries out something that sounds like, “Dear God Almighty, Mister Mirkel!”. Closed captioning suggests that Lorelai says, “Dear God Almighty Mr. Mirkle”, which is of little help.

It is possible that Lorelai actually says, “Dear God Almighty, Mr. Miracle“, and the last word comes out in a hurried screech because she has been startled awake.

If so, this could be a reference to the comic book superhero Mr. Miracle, who appears in DC Comics. First appearing in 1971, he was created by Jack Kirby. It doesn’t seem unbelievable, as Lorelai has made several references to comic book characters – particularly DC ones, such as Superman and Wonder Woman. DC is owned by Warner Bros., who made Gilmore Girls.

Interestingly, Mr. Miracle is a member of a fictional race called The New Gods, and is the son of the Highfather, the chief of the gods. It’s possible that Lorelai is using his name as a euphemism for Jesus Christ, and giving it her own geeky spin.

EMILY: So do you get your lunch at school or do you bring it with you? Because Rosa made a fabulous leg of lamb yesterday. I bet it’d make a wonderful sandwich.
RICHARD: Take her up on that. It is good. And demand a slice of strudel.

Strudel is a dish made from layers of thin pastry with a filling, usually (but not always) sweet. It became popular in the 18th century throughout the Hapsburg Empire, so is a dish originating in Austria, but also common throughout Central and Eastern Europe.

Strudel pastry was heavily influenced by the filo pastry used in Turkish cuisine, such as baklava. It is very fine and elastic, and is supposed to be rolled so thin that you can read a newspaper through it.

The best known strudel is apple strudel, and the second best known is a strudel filled with a sweet soft cheese filling. However, almost any kind of fruit can be used, and so can jam, nuts, vegetables such as spinach, and meat fillings.

That Rosa makes both blintzes and strudel suggests she may be from somewhere in Eastern Europe, perhaps Hungary or the former Czechoslovakia. There is a chance that Rosa is meant to be an East European Jew, perhaps (for example) a Czech who was rescued as a child and sent to Allied countries during World War II. If so, she would be quite mature-aged, and probably older than Richard and Emily.