After examining the map, Lorelai surprises Rory by driving her to Harvard University, which is in the city of Cambridge in Massachusetts, part of the Boston metropolitan area. Why Rory didn’t think of it herself is really the big surprise in this scene – surely she knows where Harvard is, and wouldn’t she have been begging her mother to take her there? Apparently not, as they get all the way to the front gates before Rory seems to realise where they are.

Rory wants to get a guide to the university – Harvard offers free one-hour guided group tours of its campus, given by students. Lorelai opts for the self-guided tour: you can navigate yourself around the university with the help of a brochure. Rory already knows the foundation date of Harvard (1636) by heart.

Lorelai reads about important scientific discoveries made at Harvard. The idea for the pacemaker was first originated by John Alexander McWilliam from Aberdeen University in 1889, while the first pacemaker was devised by Mark C. Lidwill from the Royal Prince Alfred Hospital and Edgar H. Booth from the University of Sydney in 1926. The brochure is probably talking about Paul Zoll (1911-1999) from Harvard Medical School, one of many who helped develop and refine the pacemaker during the 1940s and ’50s.

The other scientific advances mentioned seem to be referring to Sheldon Glashow (born 1932), a Nobel Prize-winning physicist who is a Professor of Physics at Harvard University. In 1964, in colloboration with James Bjorken, he was the first to propose the existence of the charm quark, which helped to solve a number of problems in quantum field theory. In 1973, in colloboration with Howard Georgi, he proposed the first grand unifed theory, a model in which the interactions of electromagnetism, radioactivity, and nuclear forces are merged into one single force.

Lorelai is disturbed to see that out of 18 000 applicants to Harvard in the previous year, only 2000 were accepted. It’s a piece of news she should already know by now, and comes as a stiff reality check. Possibly for the first time, Lorelai gets an inkling that Rory’s dream of going to Harvard may be out of reach. The odds are even worse now – although Harvard still accept around 2000 students per year, nearly 40 000 applied to graduate in the year of 2022.

The scenes of Harvard were filmed at the University of California, Los Angeles campus in Westwood, which doesn’t resemble Harvard University. The front gates that Rory and Lorelai enter were made for the show.

LADAWN: Welcome to the Cheshire Cat.
LORELAI: … Okay, she’s named the place after an Alice in Wonderland character. This is my worst nightmare.

As Lorelai says, the Cheshire Cat is a character in Lewis Carroll’s Alice’s Adventures in Wonderland, previously discussed and frequently referenced. The cat likes to engage in amusing philosophical conversations, and is known for its distinctive grin; even when it disappears, as it does a few times, the grin will be the last thing to vanish.

The character is a personification of the English saying, “to grin like a Cheshire cat”, meaning that the person has a very wide smile. The saying dates to the 18th century, but its origins are obscure. Cheshire was known for its dairy industry, with milk and cream making cats happy, so that’s one possible explanation.

Presumably LaDawn chose the name of her B&B after her large cat, Sammy. In real life there are numerous B&Bs in the Portsmouth area to cater to the tourist trade. Scenes at the Cheshire Cat were filmed in the same set used for the Black White Read Bookstore. 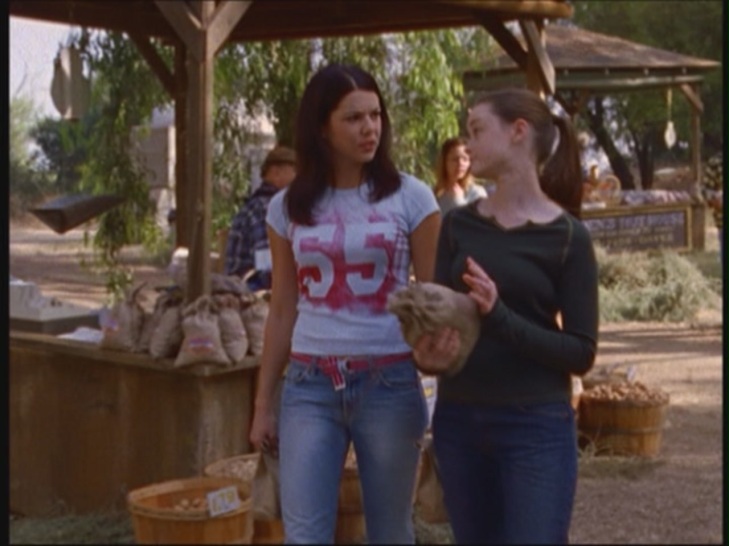 On their trip, Lorelai and Rory stop at a roadside stand called Haden’s Nut House for snacks. Its name is another sign of how “crazy” Lorelai feels right now, while Haden is very close to Christopher’s surname of Hayden.

In real life, roadside nut stands are far less common in New England than they are in California, where the show was written. The filming location for Haden’s Nut House was Griffith Park, Los Angeles.

We see Lorelai’s road trip plan in action – she is driving aimlessly around, and neither she nor Rory know where they are. It’s an obvious metaphor for how lost Lorelai feels at the current moment, and how she has no plans on how to navigate her life or move forward from here.

It’s also an opportunity to show Lorelai and Rory’s different outlooks on life, with Rory becoming increasingly alarmed and panicked at their lack of planning and direction. Interestingly, Lorelai makes an offhand remark about driving into the Pacific Ocean of the west coast rather than the Atlantic Ocean of the east coast – have her thoughts naturally wandered to Christopher in California? Or perhaps it’s a sly meta-comment about the road trip obviously being filmed in California rather than New England.

LORELAI: Hey, where were you after you broke off from the group?
MICHEL: Oh, I sat at a table with Janet Jackson and Celine Dion. Very nice guys.

Janet Jackson (born 1966) [pictured] is an American singer, songwriter, dancer, and actress who has been a prominent figure in popular culture for thirty years. The youngest of the famous Jackson family, she began her career on The Jacksons variety show in 1976, and appeared on other television shows in the 1970s and ’80s, including Fame, previously mentioned. After signing a record contract in 1982, she became a pop icon in the second half of the 1980s, and a sex symbol in the 1990s; she was one of the biggest recording artists of the 1990s. One of the best-selling musical artists, she holds the record for the most consecutive entries in the US Top Ten singles chart by a female artist, at 18. A long-time supporter of LGBT rights, she received special praise for her 1997 album The Velvet Rope, which spoke out against homophobia and embraced same-sex love. The albums’s second single, Together Again, is a tribute to the loved ones Jackson lost to AIDS, with a portion of sales going to AIDS research. She has received several awards for her charity work on behalf of AIDS education, and suicide prevention among gay youth. She is currently working on a documentary about transgender people.

Celine Dion (born 1968) is a Canadian singer. First becoming a star in the French-speaking world as a teenager, she gained international recognition in the 1980s when she won the 1982 Yamaha World Popular Song Festival, and the 1988 Eurovision Song Contest, where she represented Switzerland. In 1990, she released her first English-language album, Unison, establishing her as a star in North America and the rest of the English-speaking world. She has had several #1 hits, including My Heart Will Go On, and The Power of Love, and has won five Grammy Awards; Dion is the best-selling Canadian musical artist. She is a resident performer in Las Vegas, and is the highest-paid, receiving $500 000 per show. Michel getting along well with a drag queen dressed as Celine Dion seems to be the beginning of his obsession with the singer. Although Celine Dion does have a gay following, her inclusion seems to be in tribute to Yanic Truesdale, who plays Michel, as they are both French-Canadians. 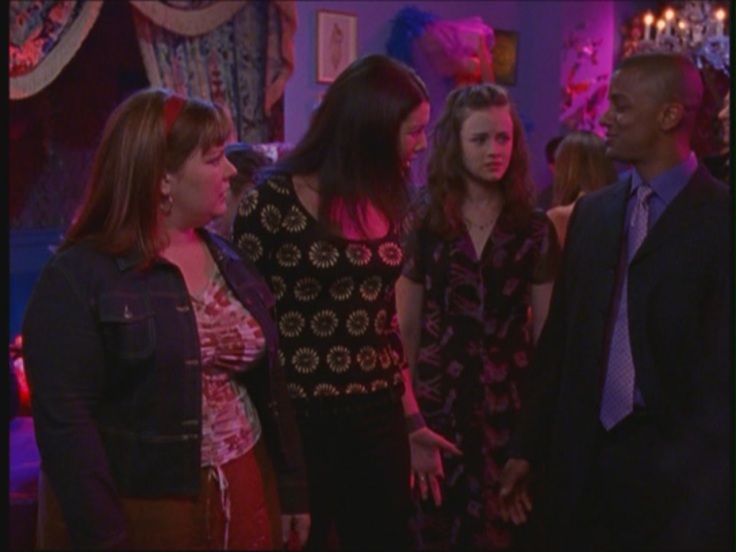 MICHEL: It is a weekend, and on the weekend I like to move, and the ladies, they like it too.
LORELAI: Especially when you move out of town. Ba zing!

Lorelai’s comeback to Michel’s statement mimics the one-line quip beloved of classic stage comedians to their “straight man”, even providing her own ba zing in imitation of the cymbal being hit to mark the punch line. Another indication that Michel was originally meant to be heterosexual.

Amy Sherman-Palladino’s father, Don Sherman, was a stand-up comedian in the 1960s, and there are numerous references to classic stage comedy in Gilmore Girls.

An in-joke – Alexis Bledel, who plays Rory, was a model before she began acting on Gilmore Girls. She first modelled for Seventeen magazine, and did have to travel as a model.

In real life, it is extremely unlikely that a bouncer would allow a 16-year-old girl without any identification into a nightclub that is 18+, even when accompanied by her parent; the penalties for doing so in the US can be quite strict. Lorelai’s way of getting people to make new rules for Gilmores is really getting quite unbelievable.

Alexis Bledel was almost 20 in this scene, so in real life actually would have been old enough to get into an eighteen and over nightclub.

LANE: Just don’t let her [Lorelai] change the date [of her wedding].
RORY: Not going to happen. Max is teaching a summer course at the University of Toronto, so if you’re back by the end of the summer, it’ll be fine.

The University of Toronto is a public university in the city of Toronto, Ontario. It is one of the oldest universities in Canada, and is the highest ranked university in the country, named among the best in the world. First founded by royal charter in 1827 and controlled by the Church of England, it changed its name in 1850 after becoming a secular instiution.

The university’s summer programs take place over 3-6 weeks, which fits in with Max being away until early August (so in fact the wedding could be moved up, causing Lane to miss it). Presumably Max is teaching classes in English Literature.

Gilmore Girls was first filmed in Unionville, on the outskirts of Toronto, so this seems like a gesture towards the show’s beginnings (at one time, they considered filming the show in Toronto permanently). 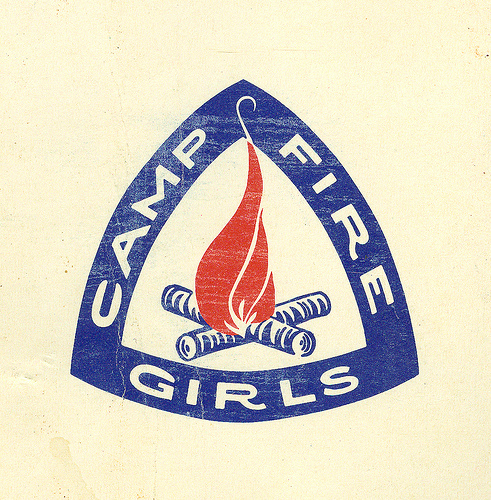 RORY: I called the Fireflies. Do they need troop leaders? Yes. Good, I’ll be a troop leader. Great. The only catch is, it’s summer. Camping season. I need wilderness skills. Why did you never take me camping?
LORELAI: Camping? Are you kidding? I couldn’t get you to step on wet grass until you were three.

The Fireflies are a fictional organisation, perhaps based on the Camp Fire Girls, founded in 1910 as a sister organisation to the Boy Scouts of America. In 1975 it became for both boys and girls, and is now just called Camp Fire. It teaches camping and wilderness skills, just like the Fireflies, and Lauren Graham was a member when she was young. In real life, there are no Camp Fire groups in Connecticut.

The 1997 black comedy film Wag the Dog , with screenplay by Amy Sherman-Palladino’s favourite playwright, David Mamet, uses The Firefly Girls as a replacement for the Camp Fire Girls. This could be an homage (and a slightly naughty one, as in the film the young Firefly Girl receives inappropriate advances from the President in the Oval Office).

If Rory would not step on wet grass until she was three, no doubt that’s from Lorelai’s example – she notoriously hates nature and the great outdoors..