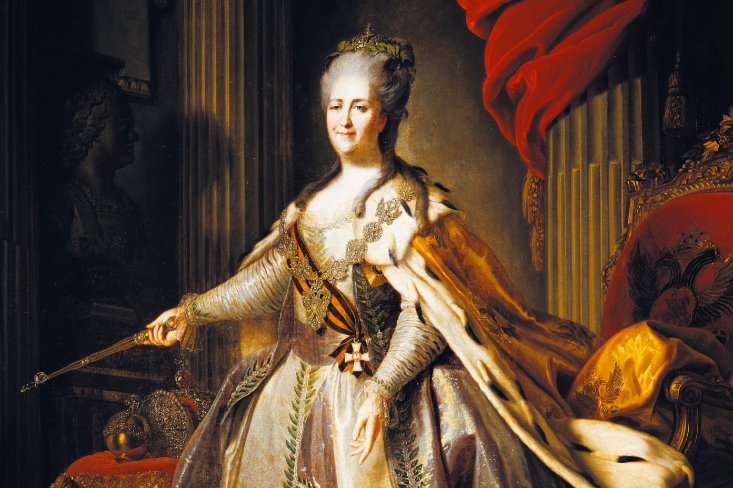 While Lorelai is mending her Chilton school sweater, Rory studies for a History test (her midterm exam?), reading through index cards on Catherine the Great.

Catherine II (1729-1796), also known as Catherine the Great, was Empress of Russia from 1762 to 1796, the country’s longest-ruling female leader. Under her reign, Russia grew larger and stronger, and was recognised as one of the great powers of Europe, while the period of her rule is considered the Golden Age of the Russian Empire and the Russian nobility. As patron of the arts, she presided over the Russian Enlightenment, and decreed the first state-funded institute of higher learning for women.

As Rory’s notes say, she was born Princess Sophie Friederike Auguste von Anhalt-Zerbst-Dornburg in Prussia. Although Lorelai jokes that everyone called her Kitten, her nickname was Figchen, a short form of her middle name Friederike. She received the name Yekaterina (Catherine) in 1744 on converting to the Russian Orthodox faith in preparation for her marriage.

Catherine married her second cousin Peter von Holstein-Gottorp, Duke of Holstein-Gottorp (that’s in north-west Germany) in 1745 – not 1754 as Rory says. Their marriage was indeed unhappy, and Catherine detested Peter at first sight. He had a difficult personality, and both of them were unfaithful to each other, with Catherine taking many lovers during her lifetime.

Peter became Peter III, Emperor of Russia in 1762, but six months later was deposed and possibly assassinated as the result of a conspiracy led by his wife Catherine, who succeeded him to the throne.

In an episode focused on women’s roles, this is a reminder of one of history’s most powerful female leaders.

One thought on “Catherine the Great”