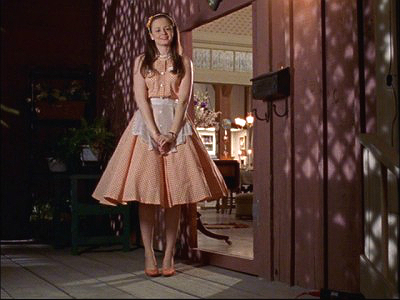 When Rory welcomes Dean wearing her 1950s housewife outfit, she inverts the traditional sit-com catchphrase, “Honey, I’m home!”, perhaps most associated with The Dick Van Dyke Show (1961-1966). Dean doesn’t know what to say, except “Trick or treat?”, the Halloween catchphrase – showing that he recognises Rory is in costume.

Where Rory’s outfit comes from is a complete mystery. It doesn’t look like a collection of clothes she or Lorelai would have at home, and besides she’s been at Babette’s (the dress at least can’t be Babette’s – she and Babette are completely different heights). Did she make a quick stop at a vintage clothing store on the way back from Lane’s, or borrow the clothes from the costume box used for Stars Hollow theatre productions?

In an episode where very little actually makes sense, the dress it just one more unexplained element. It’s almost like those cartoons where characters can pluck anything they need from the air, such as a hammer or a bouquet of flowers.