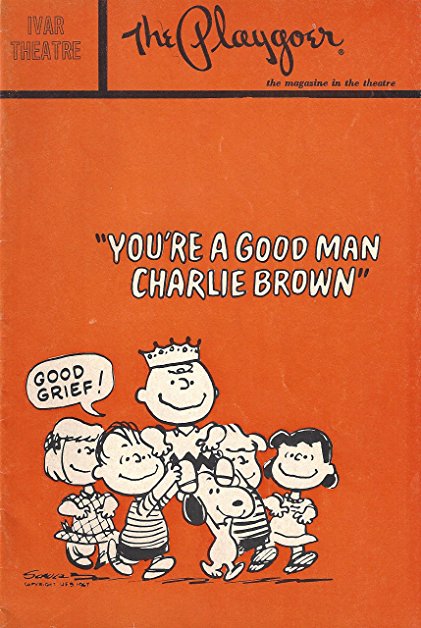 CHRISTOPHER: Lucy, Schroeder, you laying on the coffee table.
LORELAI: You pretending it was a piano. God, why is that remembered?
EMILY: Because it was such a wonderful production.
LORELAI: I don’t know if it was a production, Mom. It was just one song.
CHRISTOPHER: Suppertime.
RICHARD: Did you write that? That was really very good.
LORELAI: Dad, that’s from You’re a Good Man, Charlie Brown. It’s a famous musical.

At the age of ten (around 1978), Lorelai and Christopher sang a song for at least Richard and Emily, and possibly Christopher’s parents as well.

The song was Suppertime, from the 1967 musical comedy You’re a Good Man, Charlie Brown by Clark Gesner, based on the characters from the Peanuts comic strip drawn by Charles M. Schulz. The show premiered off-Broadway in 1967, went to London’s West End in 1968, and opened on Broadway in 1971. It had a Broadway revival in 1999.

The show was adapted for television in 1973, when Lorelai and Christopher were about five. This might be where they knew of the musical from, although it’s a favourite for amateurs to perform, and they might have seen a local production, or even been in a school production. The musical was adapted for TV again in 1985.

Suppertime is a song sung by the dog Snoopy, about his excitement in being fed after waiting hopelessly for the food to arrive. It’s a strange song to choose as a duet, because Snoopy sings almost the entire song, with only a few interjections from Charlie Brown. I presume Lorelai sung Snoopy’s part, and Christopher sung Charlie Brown’s – it seems like her to hog the limelight, and like him to do only minimal work. Possibly they chose that song because they were performing it just before dinner was served.

Lorelai and Christopher recall playing the roles of Lucy and Schroeder, in the iconic pose of Lucy lying on the piano while Schroeder plays it. It isn’t clear how this fitted in with the song by Snoopy. In the musical, Lucy and Schroeder have a scene together where he plays Beethoven’s Moonlight Sonata on the piano while Lucy expresses her love for him and asks about marriage, while Schroeder remains detached. This is ironic considering what comes later.

One thought on “Lorelai and Christopher’s Childhood Duet”