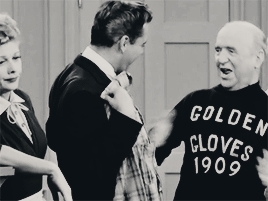 LORELAI: My father almost hit someone. My father has probably only hit another man in college wearing boxing gloves and one of those Fred Mertz Golden Gloves pullover sweaters.
CHRISTOPHER: Fred Mertz?
LORELAI: I Love Lucy – Fred Mertz.
CHRISTOPHER: Landlord to Ricky, husband to Ethel, I know. It’s just a weird reference.

Lorelai and Christopher pretty much annotate this one themselves. On the 1950s sitcom I Love Lucy, previously and frequently mentioned, Fred Mertz (William Frawley) was Ethel’s (Vivian Vance’s) husband, and the landlord of Ricky and Lucy Ricardo in New York. After the Ricardos moved to Connecticut to start chicken farming, Fred and Ethel followed them, and the Ricardos ended up being the Mertz’s landlords.

In his heyday, Fred was a boxing champion, and in the episode Changing the Boys’ Wardrobe (December 1953) he can be seen wearing a sweater which says GOLDEN GLOVES 1909. In fact the first Golden Gloves amateur boxing championship took place in 1923 in Chicago, after which the name was applied to any number of amateur boxing contests.