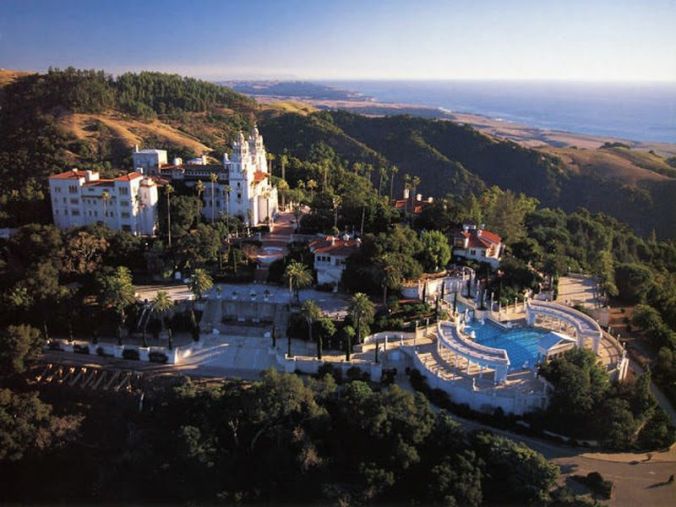 LANE: Is this what your grandparents house looks like?
RORY: No. I mean it’s big, but it’s not this Hearst Castle-ly.

Hearst Castle was built for newspaper magnate William Randolph Hearst on a family estate between 1919 and 1947. It is located near San Simeon, California, about halfway between Los Angeles and San Francisco, and is situated atop a hill, with dramatic views of the Pacific Ocean below.

Hearst Castle was designed by American architect Julia Morgan; it was originally meant to be a modest yet comfortable bungalow, but ended up a grand 56 bedroom, 61 bathroom, 19 sitting room mansion in an eclectic collection of styles that was based on the historical architecture of Europe. On 127 acres of garden, it had both indoor and outdoor swimming pools, tennis courts, a movie theatre, an airfield, and the world’s largest private zoo.

During the 1920s and ’30s, it was often visited by the political and Hollywood elite, including Calvin Coolidge, Franklin Roosevelt, Winston Churchill, Charles Lindbergh, Charlie Chaplin, The Marx Brothers, Cary Grant, Greta Garbo, Joan Crawford, Clark Gable, James Stewart, and Bob Hope. Hearst Castle was the inspiration for Xanadu, the mansion in the film Citizen Kane, although not filmed there.

Hearst died in 1951, and in 1954 Hearst Castle became a State park in 1954, being opened to the public in 1958. Since then it has operated as a public momument, and attracts millions of visitors every year. The Hearst family continue to use the original Victorian-era house on the estate as a private retreat.

The interior scenes of the party at Madeline’s house were filmed at the Greystone Mansion in Beverley Hills – the same building which is used for exterior shots of Chilton Academy. It’s nowhere near as big as Hearst Castle.