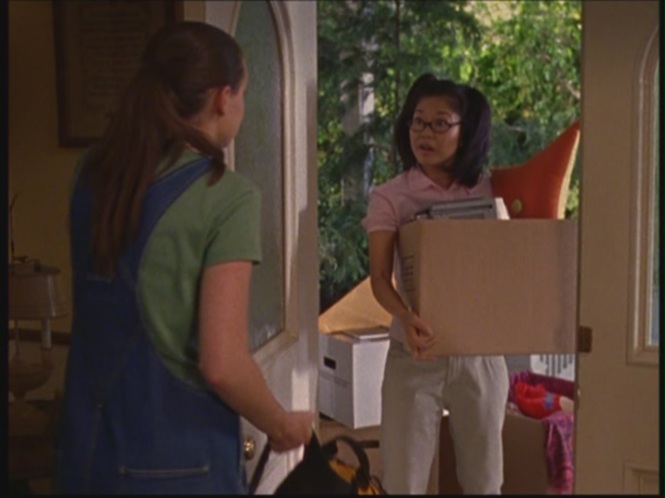 Lane comes over to give Rory boxes of all her pop culture contraband for safekeeping while she is in Korea for the summer (she fears it might be forever).

Lane leaves her CDs, magazines, books, posters, three sweaters she borrowed from Rory, and one Diva Glam lipstick which is apparently all her make-up, and probably also from Rory. There also seems to be other clothes, and various cloth knick-knacks such as cushions. Rory says she will treat it like it’s her own, which makes sense, because some of it actually is hers.

Lane also gives Rory a “retrieval kit” in a heavy yellow envelope which might help rescue her from Korea. It has the phone number of where she is staying, a map showing her location, a photo of Lane, and a mock-up of what she will look like in six months time (thinner, so she seems to expect that she will lose weight on a traditional Korean diet). It also contains the phone number for the American consulate, and some Korean phrases written out phonetically, such as “Help”, and “Have you seen this girl?”.