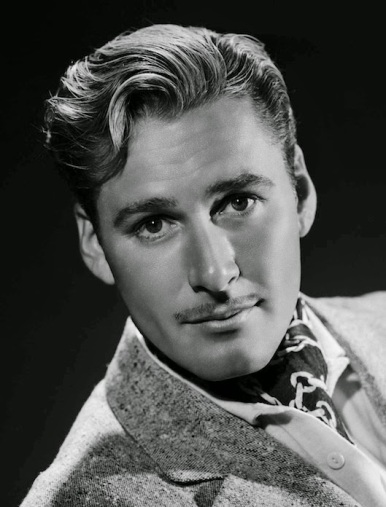 RICHARD (to Emily): You also knew that you wanted to marry Errol Flynn.
RORY: Really? Grandma had a thing for the pirate guy?

Errol Flynn (1909-1959) was an Australian-born American actor. First appearing in the 1933 Australian film In The Wake of the Bounty as mutineer Fletcher Christian, he got his first leading role in Hollywood in the 1935 film Captain Blood, where he played the rebellious buccaneer Peter Blood. After this he tended to be cast in romantic swashbucklers, often opposite Olivia de Havilland.

Flynn had a reputation as a womaniser and a voyeur, and in 1942 he was accused of statutory rape. Even though he was acquitted, his reputation was damaged. (Flynn actually picked up a teenage girl at the trial, and ended by marrying her; later he had a serious relationship with a 15 year old girl, adding some weight to the statutory rape accusations).

Emily’s attraction to a star seen as a hell-raiser and a rogue, dangerous for girls to be around, hints at a rather steamy side to her own sexual nature.

One thought on “Errol Flynn”