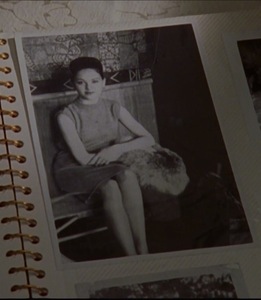 Rory, Richard and Emily look at photos. Among them is one of Emily’s younger sister “Hopie”, presumably a pet name for Hope. She lives in Paris, so Rory has never met her; what she does in Paris remains a mystery. She is described as the family’s “great expatriate”, although we later find Richard mother lives in London.

Hopie is never mentioned again; even though Richard and Emily travel to Europe later, and so does Emily and Rory, nobody ever talks about visiting Hopie. The photo of Hopie shown is Kelly Bishop, who plays Emily.