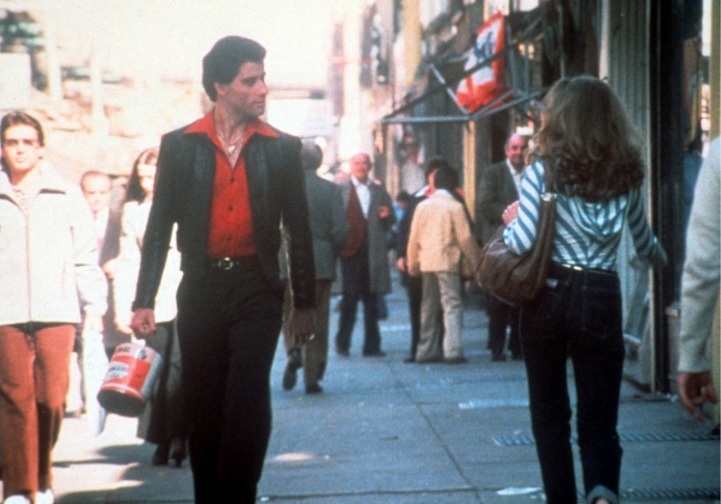 MICHEL: So, is there no dancing here? I was hoping there’d be dancing.
SOOKIE: You need to strut, Tony Manero?

Anthony “Tony” Manero (John Travolta) is the protagonist of the 1977 musical drama film Saturday Night Fever, directed by John Badham, and based on a 1976 New York magazine article by British journalist Nik Cohn, Tribal Rites of the New Saturday Night. In the 1990s, Cohn admitted he’d faked the article on New York disco culture, basing the main character on a man he had briefly seen in a doorway, and an English mod he’d known in the 1960s.

The film revolves around Tony, a young working-class Italian-American man who spends his weekends drinking and dancing at a local disco in Brooklyn. While in the disco, he is the champion of the dance floor, and this helps him cope with a dead-end job, family squabbles, racial tension in his community, and a general restlessness, while he dreams of a better life.

The film begins with an iconic scene where Tony is strutting down the streets of his neighbourhood with The Bee Gees song Stayin’ Alive playing. Both scene and song are referenced in the film’s less-regarded 1983 sequel, Staying Alive.

Saturday Night Fever was a massive box-office success, and the #4 film of 1977. It received excellent reviews, and critics named it as one of the best films of 1977. It helped to popularise disco music, and made John Travolta a household name. The soundtrack, featuring songs by The Bee Gees, is one of the best-selling movie soundtracks of all time.