[Peyton pours some of the wine into the second glass]

Lorelai refers to King Solomon, a monarch in the Hebrew Bible and Old Testament renowned for his wisdom, to the point that calling someone “a Solomon” means that they are very wise.

The best known story about him is The Judgement of Solomon, in which two prostitutes who lived together gave birth the same day. Only one of the babies lived, and both women laid claim to being its mother. Solomon easily resolved the dispute by commanding the child to be cut in half and shared between the two. One woman promptly renounced her claim, proving that she would rather give the child up than see it killed. Solomon declared the woman who showed compassion to be the true mother, entitled to the whole child.

Lorelai means that Peyton is like Solomon because he resolves his playful “dispute” with Lorelai over the last glass of wine by pouring it into two glasses (cutting the wine in two).

[Painting is The Judgement of Solomon by Nicolas Poussin, 1649]

DEBBIE: Uh, well, we’ve had some suggestions, but do you know anyone?

LORELAI: Well, you know, my friend the Sultan of Brunei is so hard to pin down.

The Sultan of Brunei is the head of state and head of government as prime minister in Brunei, a country on the north coast of the island of Borneo in South East Asia, almost completely surrounded by the Malaysian state of Sarawak. It regained its independence from the UK in 1984.

The Sultan of Brunei since 1967 is Hassanal Bolkiah (born 1946), the 29th Sultan. He is one of the last absolute monarchs in the world. He has been ranked as one of the wealthiest people in the people, with a net worth of around $20 billion. Since the death of Queen Elizabeth II, he is the second-longest reigning current monarch.

DARREN: In which play does Falstaff appear?

JACK: That would be plays … Henry the Fourth, Part One and Two, and The Merry Wives of Windsor.

DARREN: So that was a different Falstaff than Henry the Fifth?

Sir John Falstaff is a comic character created by William Shakespeare. A fat, vain, and boastful knight, he spends most of his time drinking with petty criminals, living on stolen or borrowed money. He is best known from Henry IV, Part 1, where he is the companion of Prince Hal. Although Falstaff is a drunken, corrupt lowlife, he has charisma and a zest for life that the prince enjoys. In Henry IV, Part 2, Prince Hal is on his path to kingship, and ultimately rejects Falstaff as a companion. They meet briefly only twice in the play, and Falstaff is ageing and unwell.

Darren is incorrect that Falstaff appears in Henry V – he dies offstage, but another character memorably describes his death.

Sir John Falstaff appears in the comedy, The Merry Wives of Windsor. He is vaguely recognisable as the same character, but there is otherwise no connection to the earlier plays, and it has been argued that it isn’t the same Sir John Falstaff. Although nominally set during the reign of either Henry IV or Henry V, everything in the play suggests that it actually takes place in Shakespeare’s own time, around the late 1500s. Tradition has it that the play was written at the request of Queen Elizabeth I, who asked Shakespeare to write a play where Falstaff falls in love.

LORELAI: I know, but this goes against every rule I have in the Gilmore Survival Guide. Number one – no running with scissors. Number two – no pageboy haircuts. Number three – never ever have lunch alone with a mother.

A pageboy haircut has straight hair hanging below the ears before it turns under, usually with a fringe at the front. The name is from the haircut believed to have been given to medieval page boys, or young servant boys.

The pageboy haircut was popularised for women by New York hairdresser M. Lewis in the early 1950s, gaining peak popularity in the mid-1970s and 1980s. Two famous women with pageboy haircuts were Toni Tenille, from Captain & Tenille, and Diana, Princess of Wales – the style was often called the “Lady Di” in the UK.

The pageboy haircut was popular for young boys in the 1900s, popularised by child actors such as Jackie Coogan. It became part of adult male fashion in the 1960s, thanks to British rock bands such as The Beatles and The Rolling Stones, then copied by American punk, garage, and new wave bands such as The Velvet Underground, The Ramones, and Blondie.

RORY: Paris, how did you get this number?

Prince William (born 1982), member of the British royal family, and since birth, second in the line of succession to the British throne. In 2002, Prince William was enrolled at the University of St Andrews in Scotland, and considered one of the most eligible young bachelors in the world. (By the next year, he was dating fellow student Catherine Middleton, who would eventually become his wife).

Paris never says how she got Dean’s cell phone number. Presumably she had a snoop at Rory’s pager some time.

An obvious play on epithets historically given to royalty – Ivan the Terrible, James the Just, Alfred the Great, Gerald the Fearless, Philip the Handsome, and so on.

There was a real royal with this epithet – Antonio the Determined [pictured], who managed to rule Portugal as Antony I for at least twenty days during a succession crisis. Although Philip II of Spain prevailed, Antonio did not gracefully admit defeat, but attempted to rule Portugal from the Azores, where he established an opposition government that clung on for three more years. He went into exile in France and England, taking the crown jewels with him.

In Antonio’s case, “determined” seems to be a polite word for “desperate”, or even “delusional”. Dean will likewise do his darnedest to grimly hang onto Rory, even when he knows he’s lost.

EMILY: I’ll see you for dinner tonight, Lorelai. And Luke, I’m sure I’ll see you again soon. What do you think of the Romanovs?

LUKE: They probably had it coming.

EMILY: A match made in heaven.

The House of Romanov, the reigning imperial family of Russia from 1613 to 1917. They became prominent after the first Tsar of Russia, Ivan the Terrible, married Anastasia Romanova, the first Tsarina. It is from Anastasia’s name that the family became known as the Romanovs.

The abdication of Tsar Nicholas II during the Russian Revolution on 15 March 1917 ended 304 years of Romanov rule and paved the way for the formation of the Russian Republic. In July 1918, Bolshevik officials executed Nicholas and his family.

Although Lorelai refers to their murder as “the firing squad”, they were shot and bayoneted, then the bodies taken to the forest to be stripped, buried, then mutilated with grenades to prevent identification. This is what Luke thinks they “probably had coming”.

The Romanov burial site was discovered in 1979 by an amateur sleuth, but not officially confirmed by Russia until 1989. The remains were identified by forensic and DNA analysis, assisted by British experts, and in 1998 the remains were re-interred in a state funeral in the Peter and Paul Cathedral in St Petersburg. In 2000, Nicholas II was canonised as a saint by the Russian Orthodox Church.

After the assassination of Nicholas and his family, the remaining 47 members of the Romanov family went into exile abroad, still claiming the former Russian throne. Since 1991, the line of succession has been in dispute.

EDIT: A date edited with the kind assistance of reader Omar.

LUKE: My uncle, King Tut, has to take all of them to the afterlife with him!

Tutankhamun, commonly referred to as King Tut, ancient Egyptian pharaoh who was the last of his royal family to rule during the 18th Dynasty (ruled circa 1332-1323 BC). His tomb was discovered in 1922, sparking a renewed public interest in ancient Egypt. He was buried with over 5000 artefacts, with some of his treasures being exhibited around the world at various times.

LORELAI: Hey, did you ever see that I Love Lucy where she goes to Buckingham Palace?
RORY: Mom.
LORELAI: She tries to get the palace guard to break character. That was a funny one.

Buckingham Palace is the official residence of the monarch of the UK, located in the City of Westminster, the centre of London. It was originally a townhouse built for the Duke of Buckingham in 1703, and acquired by King George III in 1761. It was enlarged during the 19th century, and became the monarch’s official home on the accession of Queen Victoria in 1837. Used for state functions and extending hospitality to visiting world leaders, it has been a focal point for the British at times of national rejoicing and mourning.

I Love Lucy, previously discussed and frequently mentioned. The episode Lorelai is talking about is Lucy Meets the Queen (1956), set during the season when Ricky is on his tour of Europe, and Lucy is accompanying him. Lucy visits Buckingham Palace as a tourist, and tries to make one of the Queen’s Guard outside the palace laugh by cracking jokes. The guards at Buckingham Place are famous for remaining stony-faced on duty – they are meant to be fined £200 if they don’t. They will sometimes smile and pose for pictures with polite, respectful tourists, especially children. 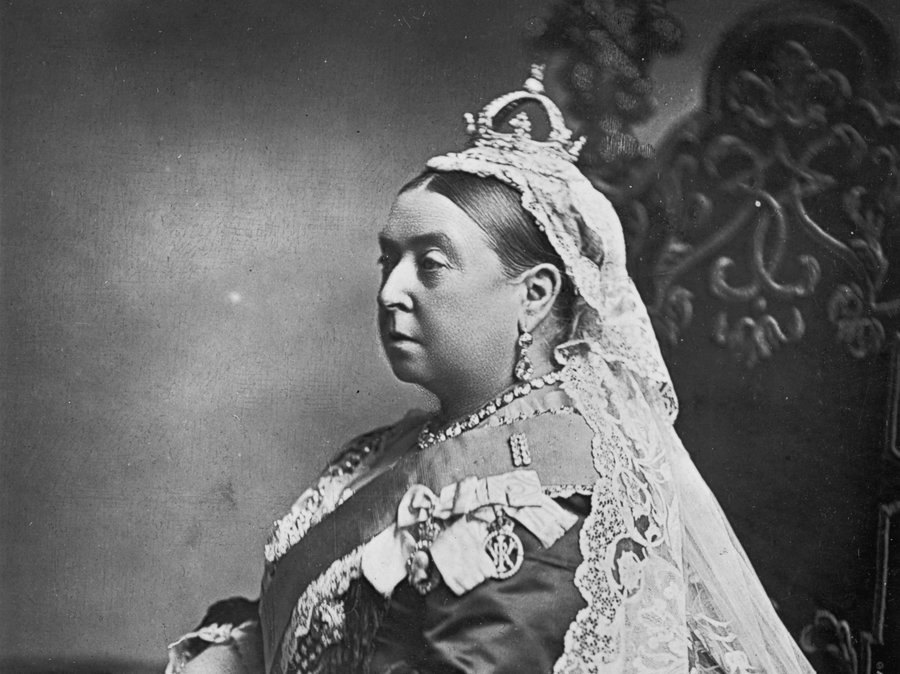 MICHEL: This is a drag club.
SOOKIE: It’s called the Queen Victoria. What did you expect, tea and crumpets?

Victoria, born Alexandrina Victoria (1819-1901) was Queen of the United Kingdom of Great Britain and Ireland from 1837 until her death. She became a national icon, and is identified with standards of strict morality that we still refer to as “Victorian”. Hr reign of more than 63 years was longer than any other of her predecessors, and is known as the Victorian Era, a period of industrial, scientific and cultural change in the UK, coupled with a great expansion of the British Empire.

Michel seems put out that he has been taken to a drag club, perhaps another signal that he was originally not presented as a gay character. Sookie mentions tea and crumpets as a favourite afternoon snack of the Victorian era (and still popular today).

The Queen Victoria is a fictional drag club. In real life there is a gay bar in Hartford where you can see drag shows, but it is not actually a drag club per se. The sign outside the Queen Victoria identifies it as a “bar and grill” (unless that is the place next door) and in real life, Hartford has a couple of bars and cafes that have regular drag shows.