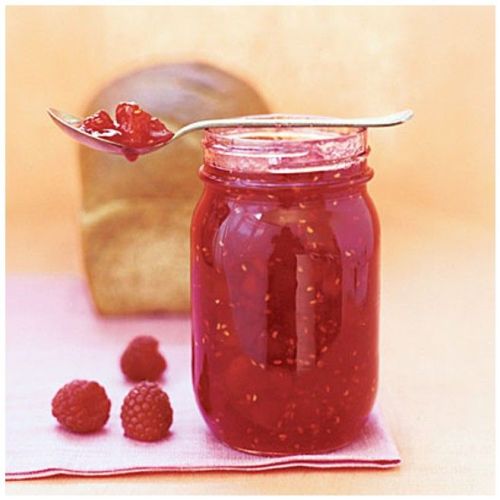 JACKSON (to Lorelai): Yeah, and I also brought some of my raspberry peach jam. I think you’re gonna like it. Put it on ice cream.

This might confuse some non-Americans, because one of the earliest Americanisms often learned is that in the US they call jam “jelly”, and jelly is “Jell-O“. So what does Jackson mean by “jam”?

The US Food and Drug Administration has some very clear rules on what constitutes “jelly” or “jam”. Jelly is made from the clear juices of fruit, then boiled with sugar and pectin so that it sets into a spreadable consistency. Despite the name, it doesn’t have gelatine in it, and is much sweeter than the fruit jellies made in the UK that are eaten with meat (eg bramble jelly). For some reason, jelly is considered a food more suitable for children, or is more popular with children.

Jam is made from boiling mashed fruit with sugar until it is able to set into a spreadable consistency (it’s basically what everyone calls jam). It may not need pectin to make it set, as many fruits already have pectin in them. For some reason, it considered more suitable for adults than jelly, or is more popular with adults. It is usually of a runnier consistency than jelly, which is why Jackson suggests using his raspberry and peach jam as a topping for ice cream.

In Star Crossed Lovers and Other Strangers, we learned that Jackson planned to begin making his own jams, preserves, and tomato sauce – the jam he gives Lorelai must be an example of what he has made so far.