This 1996 book by Happeth A. Jones is on the coffee table when Lorelai and Rory are talking. It is part of a series, and as its title suggests, is all about raising a happy, healthy Pomeranian dog.

The question is, why is Lorelai apparently reading it? Is she preparing to do some dog sitting for someone with a Pomeranian, or is she thinking of buying one, as she has been shown to be keen on getting a dog?

LORELAI: Huh. You know what I just realized? Oy is the funniest word in the entire world … I mean, think about it. You never hear the word oy and not smile. Impossible. Funny, funny word.

With the, a characteristic in Ashkenazi Jewish mode of speech in the US, meaning “in regard to, about, in the manner of”, generally in a disapproving tone to suggest that it’s too much or too often eg “You’re always with the jokes”, “Enough with the new house talk”.

Already, a characteristic in Ashkenazi Jewish mode of speech in the US. At the end of a sentence, it expresses a frustrated impatience with a situation which should have been dealt with long ago eg “Will you two stop fighting and get a divorce already?”.

So Lorelai’s catchphrase means (roughly translated), “Oh no, there is a surfeit of poodles – this situation needs to be dealt with immediately, as it should have been rectified a long time ago!”.

Fans are divided as to whether Lorelai’s off-the-cuff catchphrase is actually funny. It’s certainly very Jewish.

LORELAI: Rory, I was supposed to graduate from high school. Go to Vassar. Marry a Yale man and get myself a proper nickname like Babe or Bunny or Shih Tzu.

A shih tzu is a breed of toy dog originating from Tibet. They have a short snout, large round eyes, long coat, floppy ears, and a playful, friendly disposition. Their name translates to “lion” in Mandarin, and the breed is considered sacred in Buddhist mythology.

KIRK: He kicked my dog when I was a kid … Toto was always different after that.

Yet another reference to The Wizard of Oz. Toto is the name of Dorothy’s little dog in both the book and the film. In the film, Toto was a female dog played by a brown Cairn Terrier named Terry. In the original book, Toto is only described as a small, black, scruffy male dog, but the illustrations depict what looks like a Yorkshire Terrier. It’s possible Kirk’s pet dog Toto, a female, was likewise some sort of small fluffy terrier.

Uncle Louie is made even more unpleasant by not only kicking a dog, but probably a very small dog.

Celine Dion, previously discussed. She married her manager, Canadian music producer René Angélil, in 1994 [pictured]; they first met in 1980, when Dion was 12 and Angélil was 38. They remained married until Angélil’s death in 2016.

Steven Spielberg (born 1946), film director, previously mentioned. He is one of the most commercially successful directors of all time. He has four daughters (Jessica, Sasha, Destry, and Mikaela), but I can find no reference to any of them having a Bark Mitzvah for a Jack Russell – although the Spielberg family does seem very attached to their pet dogs, so it’s not wildly unbelievable.

A Bark Mitzvah is a fun coming-of-age celebration for pet dogs with Jewish owners, held as a joke counterpart to the Bar Mitzvah, previously discussed. The first one was held in 1958, and although some rabbis find the idea offensive, they continue to be popular. 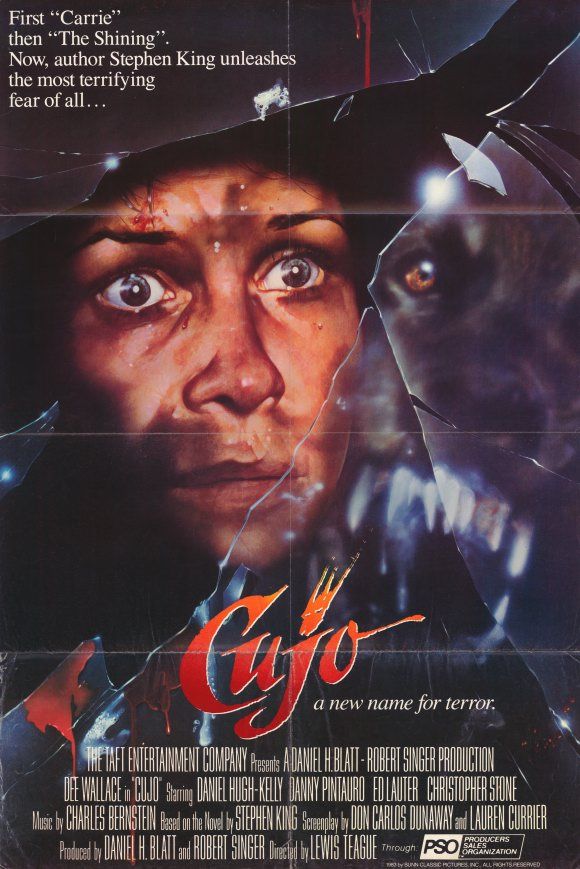 MAX: She’s [Lorelai’s] right there with you isn’t she?
RORY: What? No.
MAX: No, I thought I heard her bark.
RORY: No, that’s just a wild jackal that hangs out here sometimes.
MAX: Mm hmm. Put Cujo on the phone please.

Cujo is a 1983 horror film, directed by Lewis Teague and based on the 1981 Stephen King novel of the same name. It is about a rabid St. Bernard dog named Cujo who traps a mother and son in a car without food or water during a heat wave. Cujo was a modest success, and despite receiving mixed reviews not only has a cult following, but is one of Stephen King’s favourite adaptations of his own work. 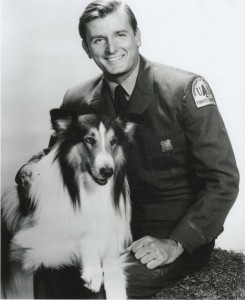 LORELAI: Everything about me repulses that man [Luke]. My coffee drinking, my eating habits. Remember when I called him Ranger Bob last week? He hated that!

Lorelai may be referring to Forest Ranger Bob Erickson (Jack De Mave) from the family television series Lassie, which follows the adventures of a long-coated collie dog, and aired from 1954 to 1973.

The show was inspired by the 1943 movie Lassie Come Home, about a dog who travels from Scotland to Yorkshire to be reunited with the boy she loves (Roddy McDowall), based on the 1940 novel of the same name by Eric Knight. Sequels followed, and so did appearances by Pal, the dog who played Lassie, at fairs and rodeos throughout the US in the 1950s. All the subsequent Lassies were played by Pal’s descendants, and like Pal, they were all male.

Ranger Bob was from the years between 1964 and 1970 where Lassie helped the US Forest Service, with Bob Erickson becoming part of the show in 1968 as one of Lassie’s carers. Ranger Bob worked alongside Forest Ranger Scott Turner (Jed Allen), but it would be perhaps too self-referential for Lorelai to call Luke “Ranger Scott”, as Luke is played by Scott Patterson. Calling Luke “Ranger Bob” may have been referencing his healthy outdoor lifestyle and love of camping.

Reruns of Lassie were shown on Nickelodeon from 1984 to 1996, and the show is still on American television today. 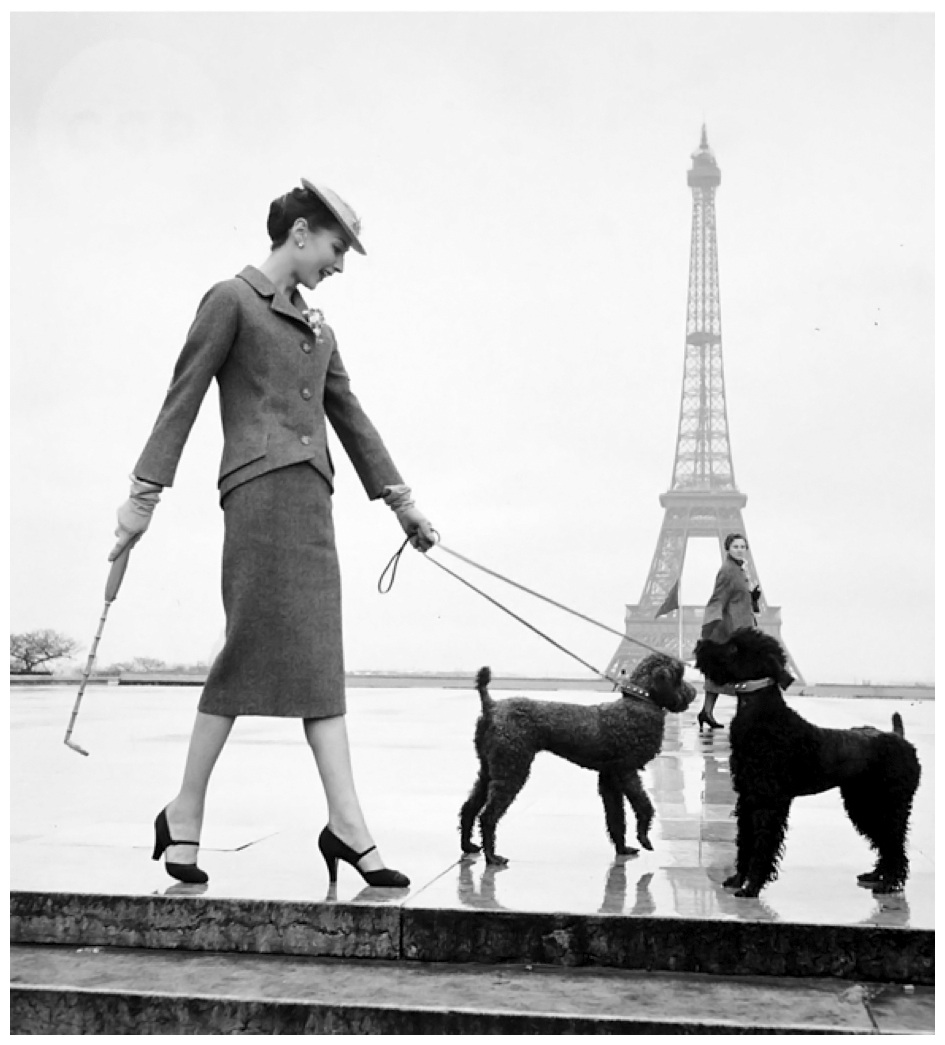 While suggesting that Richard and Emily go to Paris instead of Martha’s Vineyard, Lorelai and Rory mention some of the things associated with this city.

Impressionism: A 19th century art movement associated with small, thin brushstrokes; an emphasis on light and movement; unusual angles; and ordinary subject matters. The movement arose in Paris during the 1870s and 1880s with a number of independent art exhibitions. Famous impressionist artists include Claude Monet, Pierre-Auguste Renoir, and Camille Pissarro.

Poodles: A stereotypical image of Paris is an elegant middle-class woman taking her poodle for a walk. Although poodles were very fashionable in France some decades ago, they have fallen out of favour and are no longer chic. (The photo used was taken by American photographer Louise Dahl-Wolfe, and first published in 1940).

Crème brûlée: A rich, creamy custard dessert with a hard caramel topping. It originated in Spain, and was first given its French name (which means “burnt cream”) in the 17th century. It wasn’t common until the 1980s, and was popularised by Italian chef Sirio Maccioni at his New York restaurant Le Cirque. It isn’t particularly Parisian, although you can certainly eat it while in Paris.

It’s in keeping with their lack of travel experience that Lorelai’s and Rory’s visions of Paris are distinctly dated and second-hand. 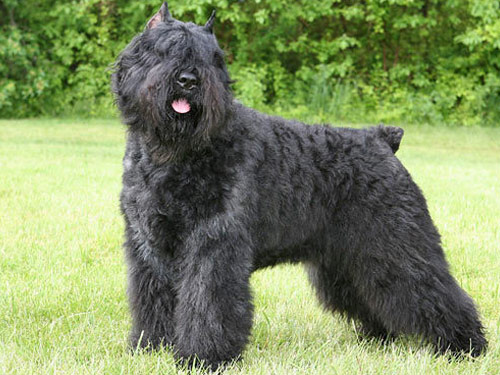 The dog Buttercup is an interesting mixture of Cocker Spaniel, Golden Retriever, Rottweiler, and Bouvier des Flandres. (The actual dog does not resemble this description very closely).

Bouvier des Flandres is a large woolly herding dog breed from Belgium; its name means “cowherd of Flanders” in French. President Ronald Reagan and his wife Nancy owned a dog of this breed named Lucky.